C.Ar.D. IN THE CITY
ART ITINERARIES BETWEEN PAST AND PRESENT

An itinerant exhibition featuring diverse forms of contemporary art and design presented in spaces that define the urban fabric of Piacenza. 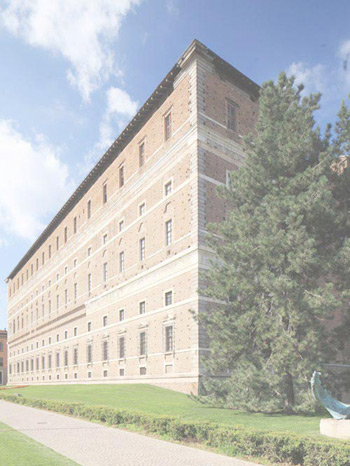 One of the city’s most important monuments, Palazzo Farnese was built for the wife of Ottavio Farnese, Duchess Margaret of Austria, who – determined to settle in Piacenza – commissioned the architect Francesco Paciotto of Urbino to design and build her a suitable residence.

The foundation stone was laid on the 11th of December 1558, however, in 1560 Paciotto would be replaced by Jacopo Barozzi, known as il Vignola, who completely redesigned the building, turning it into a real palace. Due to financial restraints, the building was only partially completed in 1602, and was limited to a single wing housing the personal apartments of the Duchess. Today, Palazzo Farnese houses the State Archives and the Civic museums of Piacenza. 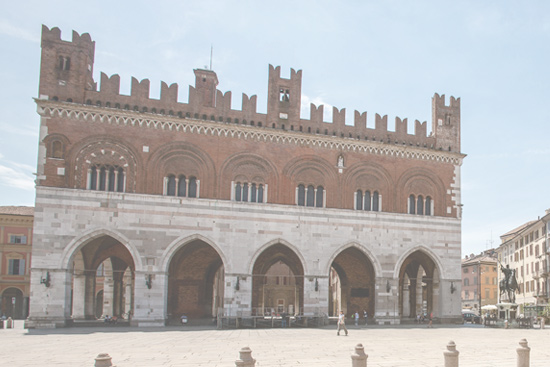 Designed as the seat of the city’s government, the construction was started in 1281, and followed by architects from Piacenza: Pietro da Cagnano, Negro de Negri, Gherardo Campanaro and Pietro da Borghetto. According to the initial project, the palace was to be rectangular in plan, but due to the economic depression that followed a severe outbreak of the plague, the project was interrupted and only the northern wing was completed.

Notwithstanding its partial realisation, Palazzo Gotico is a fine example of medieval civil architecture, and in particular of the structure of municipal “Broletti” (civil meeting places) in Lombardy. The building rises above a grand portico featuring pointed arches dressed with white stone and red marble from Verona. Beyond the portico, one reaches the main courtyard, which gives onto the rear of the building, realised in a more sober style that recalls that of the main façade. 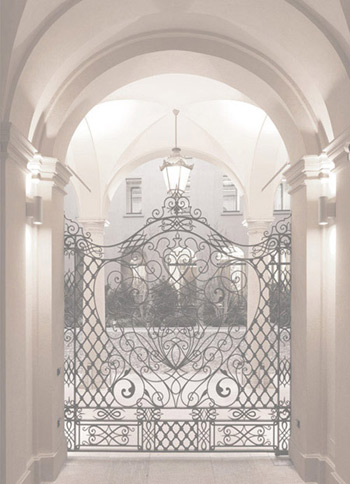 Now the headquarters of the Fondazione di Piacenza e Vigevano in Via S. Eufemia, Palazzo Rota Pisaroni is considered one of city’s most important aristocratic residences, both for its artistic and historical value. A Latin inscription located below the central balcony recalls how “Giuseppe Rota built this residence from the foundations upwards; decorating and meticulously completing even the finest details in 1762”. The façade features three rows of windows embellished with shell and mask motifs in stucco, whose soft lines echo the visual rythym of the string course frame. Historian Ferdinando Arisi describes the palace, saying: “The entrance in pink granite is a jewel of the Rococò, as is the balcony that includes it and the web of wrought iron that serves as a suspended parapet (…)”.

The building follows the typical U-shaped configuration of many stately homes in Piacenza. The counter façade is equally interesting, featuring a portico with five openings, a raised loggia and, on the opposite side, two divergent staircases that descend into the courtyard. 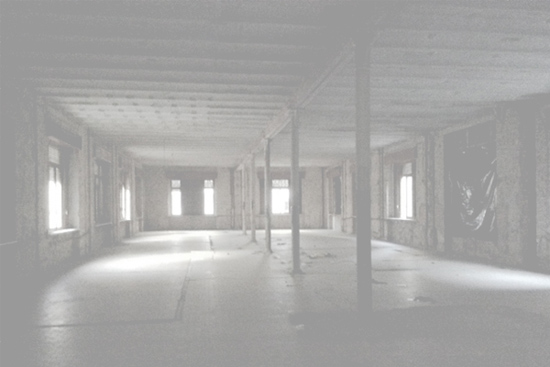 This monumental Liberty building at No. 36 Via Santa Franca was built in the 1920’s as a semi-industrial building, but was subsequently renovated during the fascist era to accommodate the Filippo Corridori recreational centre, which remained open until 1943. The building then became and remained home to the offices of Enel until its purchase by the Fondazione Piacenza e Vigevano in 2002, which has plans to turn it into a centre for art and culture.

Designed by the engineer Guido Tirelli, and completed in 1923, the building develops over three floors. The façade was decorated in line with the style dictated by fascist ideology, while the interior of the building – where one can still admire a magnificent staircase leading to the first floor – was frescoed with depictions of agricultural allegories by the local painter Luciano Ricchetti in 1929.

Located at No. 80 Via Roma, it is one of the most splendid examples of a private building in the Baroque and Rococo style, and wasbegun in 1690 by Count Giuseppe Costa Trettenero. The palace presents the typical U-shaped configuration of other aristocratic buildings in Piacenza, with a portico running along all three sides and an open scenic garden (formerly in the Italian style, but now styled on an English garden model). The central portion of the façade (mid-eighteenth century), features ashlar plate and is topped by a pediment bearing a coat of arms in relief, and is characterised by three rows of windows with wrought iron balconies and gabled cornices embellished with whimsical swirls.

On one of the portico’s three sides a noble staircase – decorated with stucco, frescoes and statues – leads to the hall of honour, which was painted by Ferdinando Bibbiena and Giovanni Evangelista Draghi in 1699. Bibbienaexpresses his supreme skill in creating effects that suggest an extraordinary and illusory expansion of space. 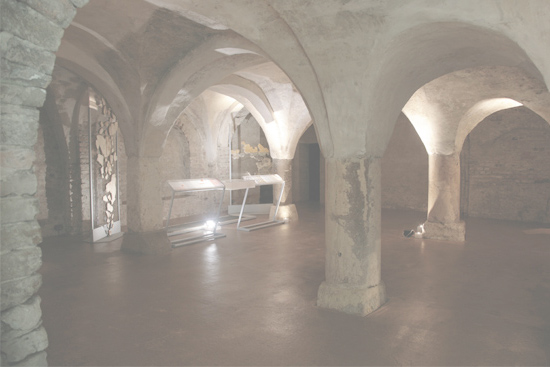 The complex of Santa Margherita, owned by the Fondazione di Piacenza e Vigevano – whose headquarters are located at Palazzo Rota Pisaroni –, is home to the Antiquarium. The architectural restoration of the complex began with the transformation of the Baroque church into an auditorium, and was completed in 2010 with the renovation of the crypt and the subterranean spaces of the Antiquarium. The restoration also involved a series of excavations, carried out between 1977 and 1982, which revealed a number of ancient structures and artefacts that are now in the safekeeping of the Fondazione and the Civic Museum at Palazzo Farnese.

The restoration of the Antiquarium has allowed the Fondazione to inaugurate a new cultural destination that illustrates the importance of this historic monument and its vicissitudes through the exhibition of these rare archaeological remains. In order to realise this project, the Superintendence for the Archaeological Heritage of Emilia Romagna has granted the Fondazione di Piacenza e Vigevano and the Civic Museum of Piacenza a long-term loan agreement that allows or the exhibition of these state-owned artefacts in the now restored building. 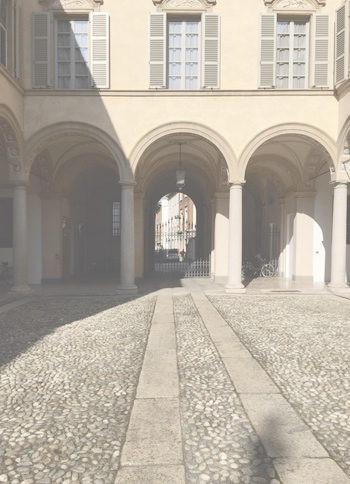 Palazzo Anguissola di Grazzano was built for Marquis Ranuccio between 1774 and 1777 to a design by the esteemed architect Cosimo Morelli. Renowned for his work between Emilia Romagna and Lazio, Morelli used innovative and intriguing architectural effects to embody the “grandeur” to which his client aspired.

Skilfully exploiting the irregular area at his disposal, Morelli maintained the traditional U-configuration typical of the city’s noble residences, but with great originality, successfully incorporating a grand staircase between the two courtyards to create an unprecedented architectural solution in Piacenza. Equally extraordinary is the architect’s irreverent approach to the coach entrance, which he positioned in line with the main entrance.